JAPAN HOUSE: Project Vision
JAPAN HOUSE is a project which aims to nurture a deeper understanding and appreciation of Japan in the international community, by creating a number of hubs from which to showcase and communicate Japan as a country of countless charms, able to enrich the rest of the world.
These hubs, located in major global cities, are designed to function as platforms for people with passion and with talent who have been inspired to use JAPAN HOUSE to articulate, express, and reveal their experiences and interpretations of Japan. 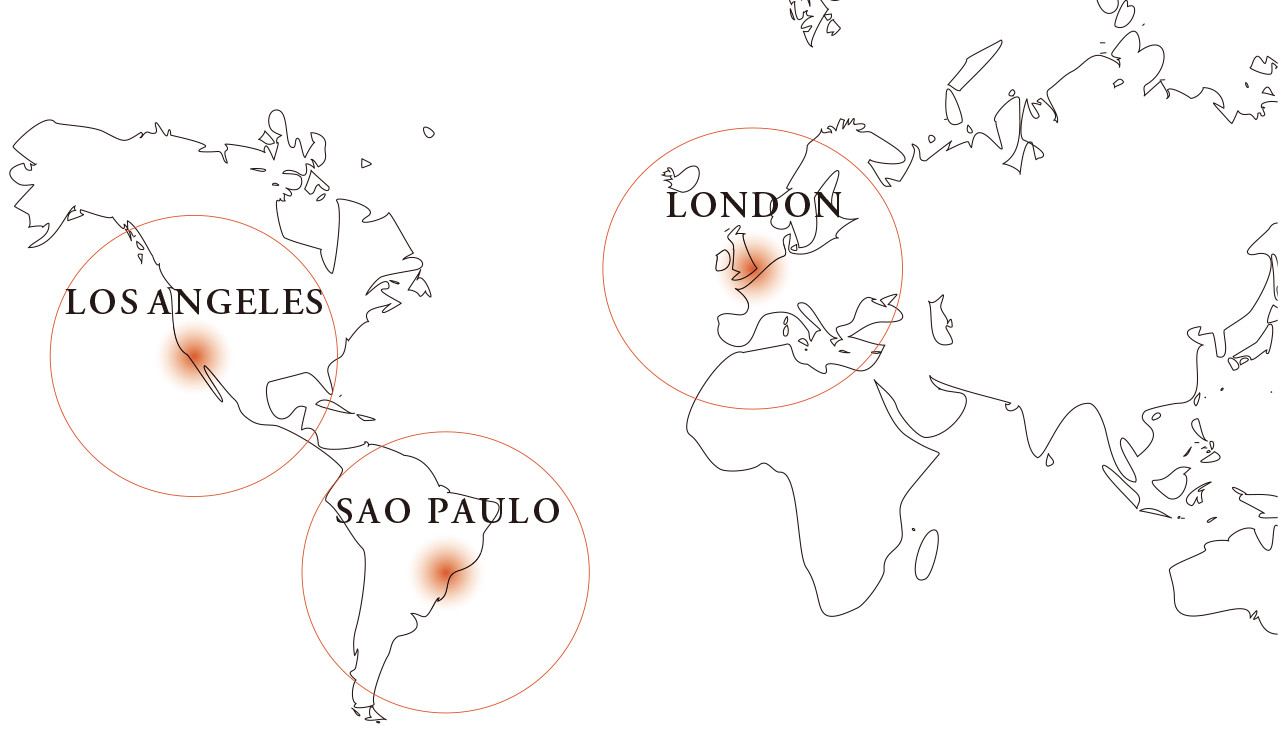 JAPAN HOUSE operates three such hubs, in London, Los Angeles, and Sao Paolo. Each hub features an exhibition space, a multi-purpose space with theater facilities, a retail space, food and drink, books, online connectivity, and a cafe space. The project merges together these functions, and the activities they enable, to introduce a variety of themes, in detail and with substance: the future of tradition, the passion of popular culture, the power of advanced technology, and the diverse appeal of Japanese food.
Activities are designed to appeal to as wide an audience as possible, including those with no previous interest in Japan.
However, none of these activities will seek to define Japan as any one thing. Rather, everyone involved in this project is motivated by a desire to keep examining, sincerely and flexibly, the same question: “what is Japan?” The project also aims to distinguish itself clearly from other cultural activities, many of which have been defined by stereotypes and faux representations of Japan. Put simply, what this project seeks to achieve goes beyond conventional attempts to inform and communicate. Instead, JAPAN HOUSE is about enabling people to realize how little they knew about Japan and then to open their eyes to Japan.
In doing so, the project embraces all aspects of Japanese culture today, from high culture to subcultures, to leading-edge technology and beyond.
Japan:
a destination you will want to discover.
Through its program of outreach events and activities, JAPAN HOUSE drives further intellectual exchange between Japan and the world, generates new business opportunities, and inspires people to explore the regions of Japan.
LONDON
SÃO PAULO
LOS ANGELES
JAPAN HOUSE is located in prominent areas of high footfall in London, Los Angeles, and Sao Paulo. From these hubs, the project is beginning to forge connections, not just with people already familiar with Japan, but also, crucially, with people who have not previously had the opportunity to connect with Japan.
What to expect from JAPAN HOUSE
Hospitality
The operation of JAPAN HOUSE embodies the values at the heart of Japanese culture: precision, politeness, subtlety, and simplicity. Each facility is kept immaculate, creating spaces which are faultlessly clean and fresh. Employees are trained in the heartfelt hospitality for which Japan is renowned, to ensure that all interactions with visitors reflect the spirit of Japan’s customer service.
Design
JAPAN HOUSE represents a mobilization of the very best of Japanese design. Facility design has been undertaken by carefully selected design specialists with outstanding portfolios, whose first task was to create an identity for each space. Facility design, interior design, and signage design were all carried out in close collaboration with design peers in Tokyo. Care was also taken to ensure that design talent from across the whole of Japan had the opportunity to be involved with the JAPAN HOUSE project.
1. Exhibitions
Each hub runs a program of regular exhibitions, with each lasting several months. Programs include exhibitions selected from open calls; these exhibitions are supported by each hub to tour all three JAPAN HOUSE locations. Exhibitions cover a broad range of themes, but common to all is the goal of deepening understanding about Japan through object or experience. All fields are embraced, providing a suitable exhibition has been curated.
The opportunity to tour an exhibition around all three JAPAN HOUSE locations should be motivation enough to secure exceptional exhibitions, which will then be brought to each hub city. This outstanding content will create a pulse of excitement to invigorate each location.

2. Talk sessions, workshops, performances, theater
JAPAN HOUSE hubs are conceived primarily as dynamic, flexible event spaces. As such, each exhibition is accompanied by a program of related events, such as talks and workshops led by exhibition experts and curators. Furthermore, each hub features a multi-purpose space equipped with theater facilities. Here, diverse content is utilized, adapted, and interpreted, while moving image and performing arts are also be showcased. Each JAPAN HOUSE hub has been designed with such events in mind, to ensure that the entire venue can be made use of as a creative space.
3. Shop
JAPAN HOUSE focuses on the real-world value of Japanese monozukuri (design-led manufacturing), selecting only those items with global relevance. This means reflecting on the present state of Japan’s craft tradition, and examining both quality and stability of supply. Research is conducted on artisans working in such crafts as woodwork, sake, lacquer ware, architecture, knife-making, textiles, paper, ceramics, bamboo ware, and metal working, looking at the circumstances of production and at the capacity to provide a stable supply.

4. Food and drink
Be it casual and comforting teishoku set meals, the season-focused refinement of kaiseki multi-course cuisine, or the simple joy of drinking authentic Japanese sake from purpose-designed vessels, JAPAN HOUSE seeks to establish a food service that meets the needs of each host city. Whatever the style of service, visitors in each city are able to relax and enjoy exceptional washoku (Japanese cuisine). Furthermore, visitors are able to enjoy a selection of alcoholic beverages, including traditional Japanese sake, which is becoming increasingly popular worldwide. These beverages have been chosen carefully to enhance the cuisine served and to complement the tableware used, creating dining experiences that showcase the unmistakable quality of Japan.

5. Books / Website / Café
Visitors to JAPAN HOUSE are able to browse a curated selection of books about Japanese art, architecture, design, travel, and food. A portal site has been developed to guide users toward other outstanding websites about Japan, thus functioning as a space to inspire interest in Japan. The wealth of information available from these books and the website enhances the comfort and calm of the cafe. 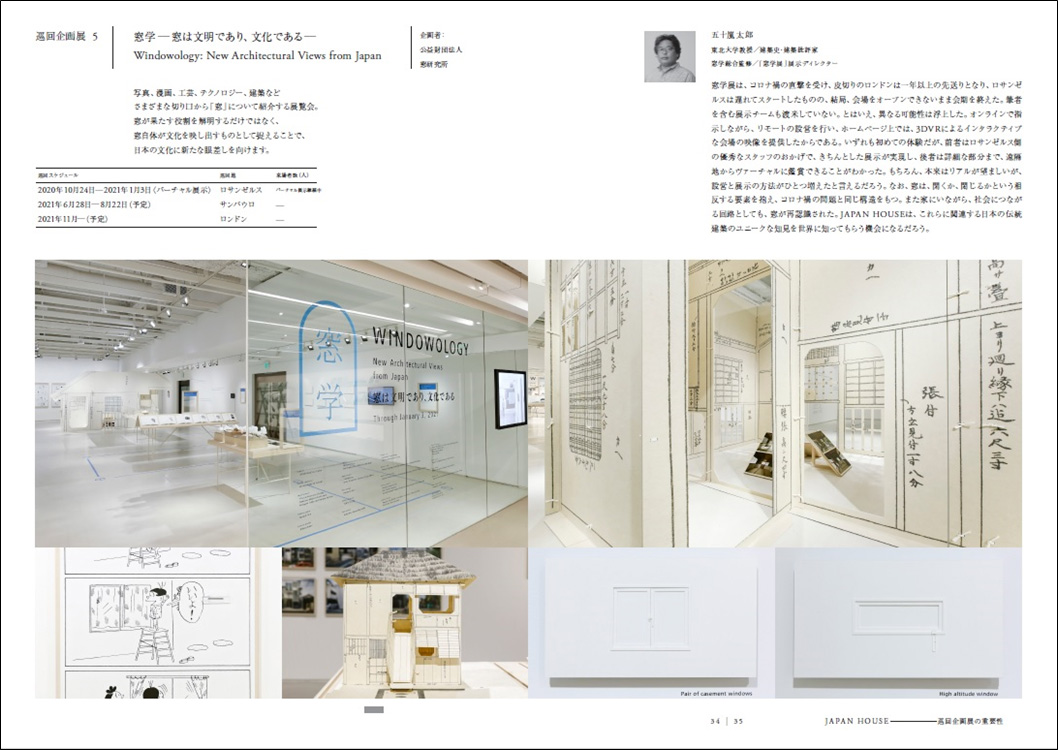 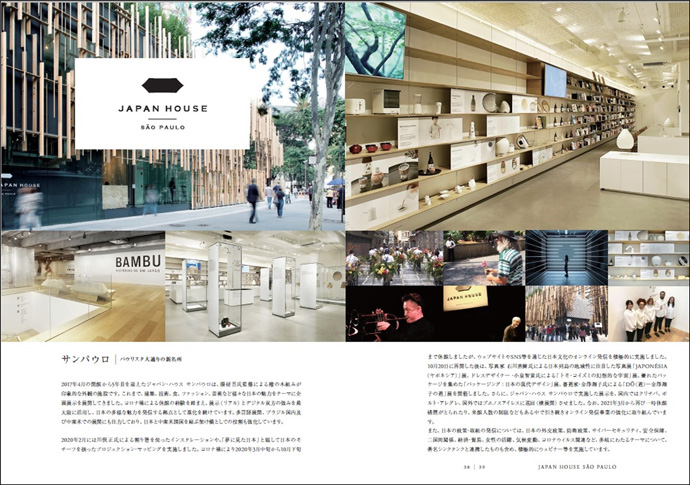 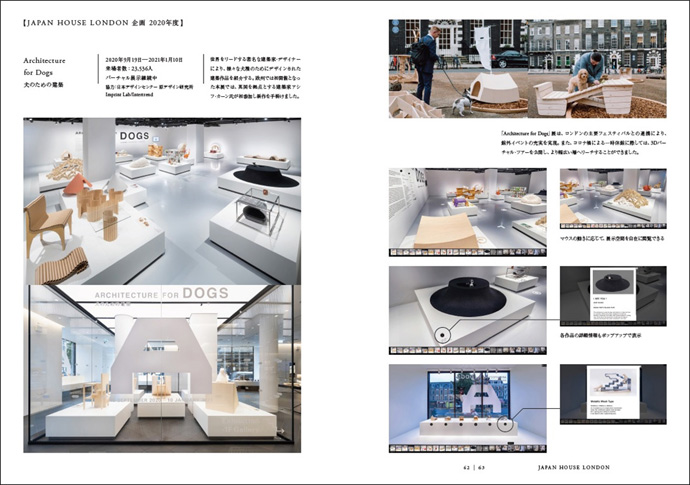 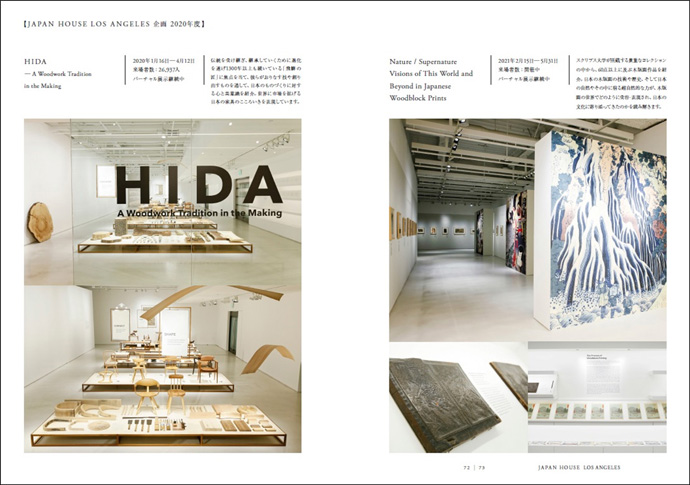